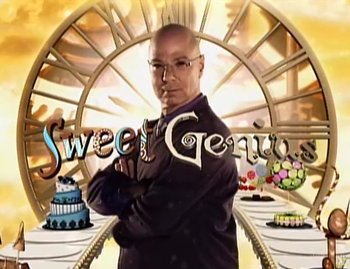 H-How did you even do that?!
"I am a Sweet Genius. Are you?"
— Chef Ron at the beginning of each episode.
Advertisement:

Sweet Genius is a competition show on Food Network, in the style of Iron Chef and Chopped. Master pastry chef Ron Ben-Israel, an internationally recognized expert on pastries, is the host who presents a challenge to four dessert chefs. The competing chefs get three rounds — Frozen, Baked and Chocolate (for season 1) or Chocolate, Candy, and Cake (from season 2 on) — to wow Ben-Israel and show they are truly sweet geniuses. To make the challenge more difficult, they are also presented with a "bewildering" inspiration and two to three unusual mandatory ingredients. The first mandatory ingredient and the inspiration come just before the round starts, Chopped-style. The 2nd (and 3rd in early seasons) ingredients are then introduced one at a time throughout the prep, forcing the chefs to adjust their dessert on the fly. If they win, they receive Chef Ron's recognition as a sweet genius and $10,000. If they fail... well, they are no sweet genius.