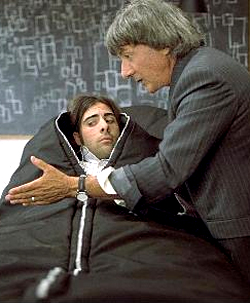 "How am I not myself?"
Advertisement:

I ♥ Huckabees (usually pronounced "I Heart Huckabees") is a 2004 comedy-drama film directed by David O. Russell.

The life of Albert Markovski (Jason Schwartzman) has been increasingly stressful. His job, at an environmental non-profit, has been increasingly difficult due to encroachment from both suburban sprawl and corporate drone Brad Stand (Jude Law) trying to take over his coalition. Also, he keeps running into an African doorman, and it seems all too coincidental. Albert decides to look for help on the matter.

He ends up turning to Jaffe & Jaffe, an existential/surrealist investigative agency headed by the sensible Vivian (Lily Tomlin) and her spacey husband Bernard (Dustin Hoffman). What begins as a simple investigation into Albert's case becomes a cerebral, madcap romp that changes Albert, Brad, a fireman called Tommy Corn (Mark Wahlberg) with a distaste for petroleum products, Brad's girlfriend and the face of Huckabees, Dawn (Naomi Watts), a nihilistic rival detective named Caterine (Isabelle Huppert) and the entire Huckabees corporation.

How am I not myself?