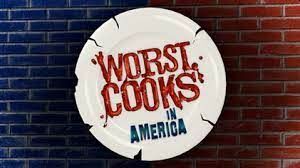 A Food Network reality show that began airing in 2010, Worst Cooks in America takes 12-16 home cooks who are terrible in the kitchen and sees if some of Food Network's most experienced chefs can't teach them how to cook. The contestants acknowledge that they're bad cooks and are nominated for the show by friends, family, and even themselves in some cases.

The recruits are divided into a red team and a blue team, with one person from each team being eliminated every episode, based on their performance during that week's tasks. The recruits are tested for their presentation, seasoning, knife cuts, and other kitchen skills in two challenges. The last two chefs prepare a restaurant-quality three-course meal during the final episode of the season, for three food critics and one winner is chosen. The prize is $25,000 and a Food Network-cooking set.

On October 2nd of 2016, a spin-off focused on baking premiered, titled "Worst Bakers in America", headed by chefs Duff Goldman and Lorraine Pascale (who hosted the blue and red teams respectively), and brought back two contestants from Worst Cooks, namely David Rosenberg from Season 6 and Carla Johnson from Season 4. It received a second season in July 2019, with Jason Smith replacing Duff as the blue team captain.