Not Listening to Me, Are You? 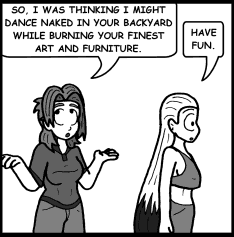 Amélie: I had two heart attacks and had to have an abortion because I did crack while I was pregnant. Other than that, I'm fine.
Father: [absent-minded] Good.
— Amélie
Advertisement:

Bob is busy with something — playing a game, reading a book, tampering in the domain of God — and Alice comes up and tries to talk to him about "something important". Bob just answers with a few muttered lines of, "Yep, uh-huh, yeah," the lion's share of his concentration on his task, until Alice gets annoyed and says something completely outlandish: "There's a weasel chewing on my figgin." After a moment, the absurdity sinks in and Bob asks what she said, which (usually) prompts the stock phrase: "You're not listening to me, are you?" Variations on the gag includes Bob failing to even register Alice's outlandish comment and her lamentation that he isn't listening, or first noticing what she said after she has long given up and left the room in exasperation.

The actual import of what Alice has to say, compared with the importance of what Bob is doing, is largely irrelevant to the gag — it's perfectly okay to interrupt both video games and world-saving research with relationship questions, after all. The whole point of the gag is to bring out as absurd a non sequitur as possible when Alice "tests" whether Bob's listening to her.

Comes in several flavors. The most common is the girlfriend (or wife) who is angry with boyfriend/husband for ignoring her in favor of whatever he's doing. This is almost always the woman testing the man; it's a rare case where the woman is seen as the neglectful one in the relationship. Usually ends in a false reconciliation (sometimes with Bob reaching out to keep playing his game while still hugging Alice), and also often with Alice even angrier at Bob because he doesn't see what's wrong with his behavior. The next most common is the mentor or close friend (who may be either sex) trying to distract Bob from an obsession: Bob must beat the final boss, he must train until he drops, he must finish researching the cure for the supervirus. His efforts may have a noble intent, but he's going to make himself sick with how much he's putting into it, and neglecting food, sleep, and basic hygiene. If the stock phrase is spoken, it's usually with mere impatience or concern instead of outright anger.

A subversion would be if they were listening and pretend not to, or appeared to be not paying attention but could repeat what the person said verbatim.

This is Truth in Television as almost any couple can attest.

"We Were All Assimilated"

In "Memorial" from "Star Trek: Voyager," B'elanna Torres made the mistake of replicating a television for Tom Paris. Now he's absorbed in cartoons and hockey and certainly not listening to her story about what happened when he was away, even when she claims that the warp core overloaded and the Borg invaded and everyone was assimilated.

"We Were All Assimilated"

In "Memorial" from "Star Trek: Voyager," B'elanna Torres made the mistake of replicating a television for Tom Paris. Now he's absorbed in cartoons and hockey and certainly not listening to her story about what happened when he was away, even when she claims that the warp core overloaded and the Borg invaded and everyone was assimilated.