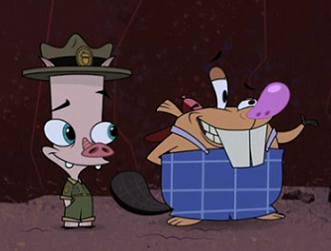 Iggy Arbuckle and his sidekick Jiggers.
"And of course our show also has baaad guyyys."
— Opening theme song, featuring with a bit of Lampshade Hanging
Advertisement:

Iggy Arbuckle is a Canadian Animated Series that aired on Teletoon and was based on a comic from the June 2004 issue of National Geographic Kids called Iggy Arbuckle: Nature Freak!. The show was created by American artist, author, and animator Guy Vasilovich (who had previously had another show made in Canada, Moville Mysteries) and produced by Blueprint Entertainment. It ran from June 29 until October 10 of 2007 for 26 episodes over a single season.

Iggy Arbuckle's eponymous character (voiced by Jonathan Wilson) is an anthropomorphic pig who leads a group of forest rangers called the Pig Rangers in protecting Kookamunga National Park (known as "The Kook" for short) from the evil Catfish Stu (voiced by James Rankin; and no prizes for guessing what kind of animal he is), the owner of a failing trailer park who is trying to take over The Kook and exploit its resources for the sake of increasing his revenue. Assisting Iggy in his efforts to save Kookamunga National Park and its ecosystem from Cafish Stu is Iggy's best friend and fellow Pig Ranger, a beaver named Jiggers (David Berni). Rounding out the cast are a hippie chipmunk named Zoop (Stephanie Anne Mills), a skunk named Spiff (Derek McGrath) who cleans up the park's litter, a rat named Kira (Novie Edwards) who runs the local tourist kiosk, and Catfish Stu's ferret henchmen Robear and Robert (Patrick McKenna and Neil Crone, respectively).