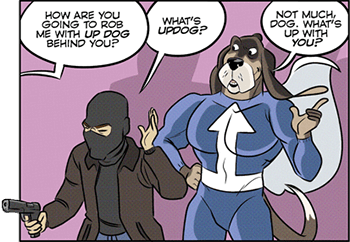 Daffy: Nut Season? What's that supposed to be?
Bugs: Unfortunately, it's that time of year where I finally get ligma.
Daffy: What the hell is ligma?
Bugs: Ligma nuts!
— Bugs is Nuts About Ducks

A "henway" is a type of joke where the first person in a conversation uses a term in a way that leads the other person to respond with "what's <term>?". The first person then replies with the punchline (often a pun, although it doesn't have to be.)

Some of the most common henway terms are "<noun>way," note "<noun> weigh", answered with a weight, as is the case for the Trope Namer "<noun>fore," note "<noun> for?" answered with a purpose "<noun>do," note answered with what the thing does "Grecian urn" note "Grecian earn" — answer "<X> drachmas a day" and "yoors" or "yaws." note "yours"; most often found in scenes taking place in bars — the question "What's yours?" is a standard way of offering to buy the other person's next drink"

Also known as a "Pun Trap". The best way to subvert the standard form if someone tries it on you in Real Life is to ask "What's that?" note  It's a pronoun which can be used to refer to something previously mentioned, but that's not important right now.

A favourite of the Pungeon Master, and of anyone else who has had a bit too much snoo or updog lately.

A common subversion is for the victim to ask about the part of the question that's expected to be common knowledge ("So sad that Steve Jobs died of ligma." "Who's Steve Jobs?") though it's a toss-up whether the jokester will even notice the deviation or just deliver the punchline anyway.

Just about any "Knock Knock" Joke is a Henway.

Compare Mathematician's Answer, Not Actually the Ultimate Question, Rhetorical Question Blunder, Who's on First?. If you do this all by yourself, it's a Feghoot. A Real Joke Name can be an inversion if the person's name sounds like it's a setup for this trope.

In an animated version of classic scambaiting call by Kitboga, Kitboga asks the scammer if his company accepts Updog cards as payment. "What is Updog?" wonders the scammer. "Not much! How about you?"

In an animated version of classic scambaiting call by Kitboga, Kitboga asks the scammer if his company accepts Updog cards as payment. "What is Updog?" wonders the scammer. "Not much! How about you?"