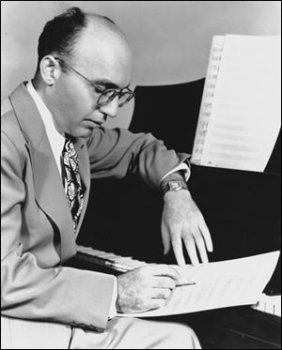 "I have never acknowledged the difference between serious music and light music. There is only good music and bad music."
Advertisement:

Kurt Julian Weill (March 2, 1900 – April 3, 1950) was a German composer. He's best known for his work with Bertolt Brecht, particularly on The Threepenny Opera. He fled Nazi Germany in 1933 and after a few years settled in the United States, where he composed many songs for Ira Gershwin and contributed to several Broadway musicals.

He was married to Lotte Lenya. Lenya's correspondence with Weill was published in book form, titled Speak Low (When You Speak Love). A play based on the collected letters, Lovemusik, opened on Broadway in 2007.