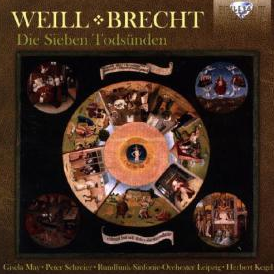 - "She's the one with the looks, I'm realistic; she's just a little mad, my head is on straight. But we're really one divided being, even though you see two of us. And both of us are Anna. Together we've but a single past, a single future, one heart and one savings account. And we only do what's best for one another. Right, Anna?"
- "Yes, Anna."

Die Sieben Todsünden (The Seven Deadly Sins) is a 1933 operatic ballet by Bertolt Brecht and Kurt Weill, written at the start of Brecht's exile from the German stage. It was originally intended for a French audience.

The story, told in chapters, is narrated by a young American woman named Anna. She's decided to spend seven years in the "great big cities" of the United States to earn money, allowing her family to build a nice, cozy home in Louisiana. Full of hope and curiosity, she sets out to become a cabaret dancer.

However, on the road, Anna quickly develops an internal struggle. Her rational side, the singer, wants Anna to submit to her audience's (often perverted) wishes and make money. Her romantic side, the dancer, wants Anna to dedicate herself to the idea of art — to give in to the seven deadly sins and live a decadent life. The two sides are represented on the stage by two women, with the family acting as a Greek Chorus.

The minimalist play is one of Bertolt Brecht's most famous and most popular works. Several English translations exist, the most famous of which was beautifully recorded by Marianne Faithfull. The "canon" German version was performed and recorded by Miss Lotte Lenya.