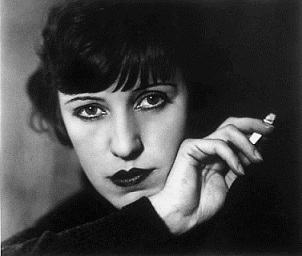 Lotte Lenya (formerly Lenja), (18 October 1898 – 27 November 1981), born Karoline Blamauer, was an Austrian singer and actress who worked in Germany during the Weimar era then in the USA. She was married to Kurt Weill (twice) and appeared in many of Bertolt Brecht's plays.

She originated the parts of Jenny in The Threepenny Opera, Anna in The Seven Deadly Sins, and Fräulein Schneider in Cabaret. She did not originate the part of Jenny in The Rise and Fall of the City of Mahagonny, though one song had to be specially recomposed for her. She also performed alongside Peter Lorre in Frühlings Erwachen.

In 1933, like many other left-leaning artists and folks who had married a Jewish person, she emigrated from Germany during the rise of Nazism and moved to the United States, where she resolved to speak and write in English almost exclusively from that point on.

To modern audiences, she's probably most famous for her role as SPECTRE operative Rosa Klebb in the James Bond film From Russia with Love. She was famously name-checked by Louis Armstrong during his recording of "Mack the Knife", when he saw her standing near him in the studio, and she is also a star on the constellation map on the back cover of Frank Zappa's One Size Fits All (1975).

Her signature song is "Pirate Jenny", and her performance of the song ended up strongly influencing Nina Simone, Bob Dylan, Amanda Palmer, Lars von Trier, and even Alan Moore when he wrote Watchmen.

Lenya's correspondence with Kurt Weill was published in book form, titled Speak Low (When You Speak Love). A play based on the collected letters, Lovemusik, opened on Broadway in 2007.