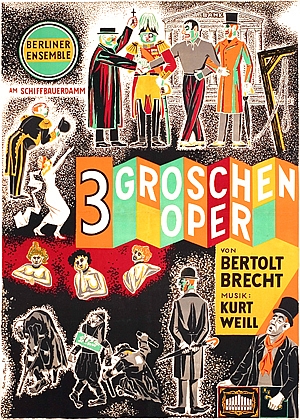 "You're about to hear an opera for beggars. And because this opera was created so glamorously, the way only beggars can dream something up, and because it should still be so cheap that only beggars would pay for it, it's called The Threepenny Opera".
— The Street Singer
Advertisement:

Die Dreigroschenoper is Bertolt Brecht and Kurt Weill's Darker and Edgier adaptation of John Gay's The Beggar's Opera. Despite the title, it's a musical. It was first performed on August 31, 1928 in Berlin.

The play centers around the marriage of Polly Peachum (daughter of "Beggar King" Jonathan Jeremiah Peachum) to notorious gangster and pimp Macheath (better known as Mack the Knife) who is getting old and wants respectability, titles and retirement. Mack has completely outsourced his crimes to his gang, and lives on his reputation. He's best friends with his old army buddy Jack "Tiger" Brown, the London chief of police, whose daughter Lucy he's dating on the side. He's also chummy with his former live-in girlfriend Spelunken-Jenny, a whore he still visits on Thursdays. And he's got great plans: instead of robbing banks and stabbing men, he now wants to found a bank and hire men. Mack is ready to climb out of the criminal slums and into criminal nobility. And Polly is just the right kind of wife to have by his side for it. The only problem in his plan is Jonathan Peachum, who not only hates Macheath, but will do anything to get his daughter back — after all, she's valuable goods, and he's invested a lot of time and money in her proper upbringing. Peachum devises a plan to blackmail Tiger Brown and convince him to arrest Macheath. Since the Queen's coronation is due in a few days, Brown has his hands full trying to keep the beggars off the streets. Which Peachum decides to use to his advantage in blackmailing Brown: imagine thousands of beggars, crawling out of the gutters, crowding around the Queen. Mack tries to flee, but can't shake his Thursday habit at Jenny's brothel and is consequently arrested by a reluctant Brown. And when Lucy Brown shows up, apparently married to Macheath and pretending to be pregnant, Polly starts to realize that the marriage was a huge mistake.

Brecht's production was intended to be an ironic Deconstruction of familiar European dramatic conventions and he made several important dramatic innovations, illustrating his concept of "epic theater", namely protagonists the audiences do not easily identify with, action taking place on multiple levels and social and political commentary used for dramatic effect. The music by Kurt Weill has endured in many cover versions recorded in Germany and in English (in a series of translations). The songs frequently covered include "Mack the Knife", "Pirate Jenny", "What Keeps Mankind Alive" which have seen versions by Bobby Darin, Frank Sinatra, Nina Simone, Nick Cave, Tom Waits among others.

Notable adaptations and re-interpretations include:

The Threepenny Opera contains examples of: