Soiled City on a Hill 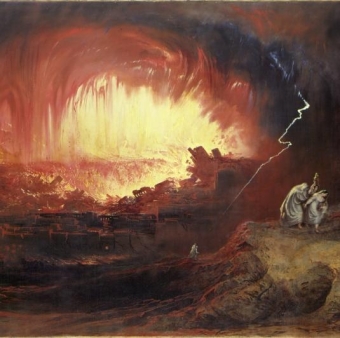 God doing some urban renewal.
The Destruction of Sodom and Gomorrah by John Martin

“When a country goes mad, it has the right to commit every horror in its own walls.”
— The Scarlet Pimpernel
Advertisement:

This is a city or civilization that is destroyed after growing so complacent, hubris-laden, and/or corrupt that it is beyond redemption. Usually the agent of destruction is divine retribution or a scourge of God but also can be the result of karmic justice, nature's revenge, Knights Templar, or even human error.

Almost always a Wretched Hive. Can also be a City Noir. The opposite or (as mentioned previously) the corrupted version of the Shining City. This trope often overlaps with Look on My Works, Ye Mighty, and Despair! and is used as An Aesop. The Shadow Land of Arcadia and the Ghibli Hills; many a Farm Boy who went expecting the Shining City was lucky to escape with his life, if at all.

Water and fire are common means of a Soiled City's destruction.

The name refers to the City on a Hill

, an early symbol of American Utopia.

Compare with After the End, Cataclysm Backstory, And Man Grew Proud, Heel–Face Town and Götterdämmerung. Also compare Vice City, which is a city that has never been destroyed despite being similarly infested with crimes.