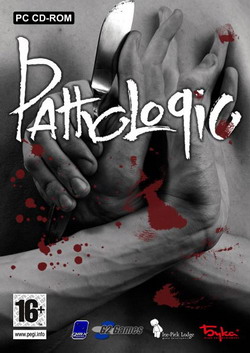 "You can escape anything, even the punishing hand of the Inquisitor... but you can't escape yourself."
Advertisement:

A 2005 game, the debut of the small Russian indie game developer Ice-Pick Lodge. As for its genre... uh... Well, for simplicity's sake, let's just call it a First-Person Psychological Survival Horror Adventure Game with some light RPG Elements — although that description might not entirely do the game justice.

Pathologic (or "Мор. Утопия" (lit: "Plague. Utopia") in the original Russian) is set in a town in the middle of nowhere which is beset by a strange disease. The game follows one of three "healers" who have come to the town for their own reasons, and all have drastically different methods. Just as they arrive, an epidemic starts and the town is quarantined. At that point, the game puts you in control and gives you 12 in-game days to perform quests and protect yourself and others from the disease via some very dubious methods.

The first storyline is that of a young Bachelor of Medicine, Daniil Dankovsky. He was invited to the town to scientifically establish that one of the residents is over two hundred years old. However, the man dies before he gets a chance to meet with him — not of old age, but by the hands of an unknown culprit. He takes it upon himself to investigate the old man's death and find his murderer, but as he does so, he also uncovers evidence of the brewing epidemic. Following this, Dankovsky finds himself strong-armed by the local aristocrats into using his skills and equipment to research the plague, and he quickly becomes buried in their intrigues.

The second storyline is that of a Haruspex, Artemy Burakh (pronounced "ahr-TYEH-mee BOO-rakh", with the "kh" sound like the "ch" in Bach or loch). He is one of very few people allowed the knowledge and right to cut open dead human bodies. His father shared his profession and lived in the town, but died recently, and he called on his son to take his place. However, people believe that he killed his father, so everyone is hostile to him. Burakh must covertly investigate the cause of the plague, as he tends to attract violent mobs whenever he moves out in the open.

The third storyline is that of Clara, the Changeling with an unclear past. Many believe she is either a saint or a steppe demon who brought the plague in the first place. She is able to either heal a person or utterly destroy them with a gesture of her hands. Stranded without her memories, she nevertheless performs her deeds in the certainty they will benefit something.

There are three main dynasties in the game, all in some way fighting against each other for the control of the town. Other than them, there are loads and loads of other characters, all somehow related to the story.

The game received many good reviews praising its atmosphere and picked up dozens of awards in its native country. Sadly, the English translation was, on release, absolutely incomprehensible. This — coupled with the developer being practically unknown outside Russia — resulted in poor sales. This game is not for everyone, and there is a lot to take in in order to master its brutally complex and extremely punishing mechanics. And even when the player think they have mastered them, the game is always ready to throw them a really nasty curveball or five. It is, however, a very powerful, emotionally draining experience, and not to be missed.

of this game in September 2014. This game is known as Pathologic 2, although it is not a plot sequel, instead retelling the original's story with more content and mechanics, as well as more polished graphics. It is frequently referred to as a "remake", but the developers came to reject this label, instead likening it to how games like Silent Hill 2 and Dark Souls 2 revisit and experiment with the concepts introduced in their predecessors. The initial build, released on May 23 2019, only contains the Haruspex's story; the stories of the Bachelor and Changeling are coming later.

The game provides example of:

If you run out of time in the game, what isn't killed in the plague is wiped out by the military.

If you run out of time in the game, what isn't killed in the plague is wiped out by the military.