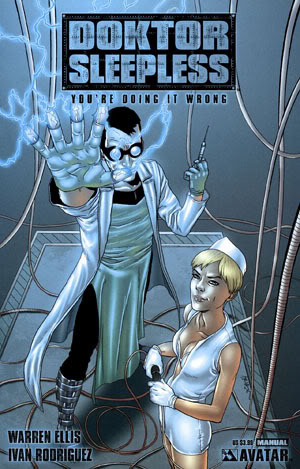 "Someone stole your future. Don't you ever wonder who?"
—Warren Ellis on his Live Journal

About ten years from now, the American city of Heavenside is home to the "grinder" subculture: teenagers and young adults using extreme body modification - not decorative so much as functional, actually building computers into themselves - as a new way of life. Grinding began with the pioneering work of, among other people, the young genius and futurist John Reinhardt, who disappeared years ago.

One day, John Reinhardt comes back. In his time away, he has reinvented himself, and Heavenside comes to know him as the slightly insane pirate radio disc jockey Doktor Sleepless. As the Doktor, Reinhardt is practically a cartoon character, who deliberately affects the demeanor of a mad scientist, complete with a surly, scantily clad "nurse" as his sidekick. The authorities are helpless to stop him as he takes control of the airwaves, rapidly developing a massive following among the disenfranchised lower class in Heavenside.

Publically, the Doktor is a harmless crank, even going so far as to open free clinics for the poor and homeless in the city.

It's all part of a much larger plan. Soon his followers are taking part in wholesale gang violence that has Heavenside looking and sounding like a war zone, shielded from the security patrols by bizarre "anonymizer" masks that just happen to look exactly like the Doktor. Soon a growing number of people in the city have become afflicted with a bizarre disease called "St. Theresa's Eyes," which seems to make them see angels.

Doktor Sleepless has come back to Heavenside to destroy it. The only person who has any idea what might be going on is Sing Watson, who used to date Reinhardt years ago, and it's already too late for her to stop it.

Doktor Sleepless is a comic book series from Avatar Press, written by Warren Ellis with art by Ivan Rodriguez. It originally lasted for 13 issues, from July, 2007 to July, 2009. It was one of the works that was brought to an untimely end by Ellis's infamous hard drive crash

, and went on an extended hiatus after issue #13.

It has an extensive wiki of its own here

Not to be confused with Doctor Sleep.