My Parents Are Dead 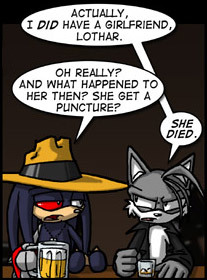 Someone brings up a potential topic about someone close to them. Another one asks what happened to them, and the former frowns, saying "They're dead".

This isn't when a main character's parents are dead. Someone has to say some variation of "My Parents Are Dead". Thus, it is a common subtrope of Parental Abandonment.

It might not stop certain characters from cracking a Your Mom joke anyway, despite (or maybe especially because of) having this knowledge. On the flip side, the target of such a joke may very well use this as a rebuttal, regardless of whether or not it's true.

A Self-Made Orphan may use this as a half-truth to garner undeserved sympathy.