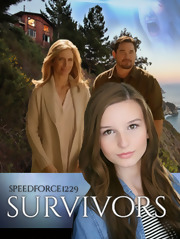 Story by SpeedForce 1229
The mention of her mother almost took her back, but she shook her head. There was no time. Kara was a practical girl now. She had to be. No more playing, no more crafts, no more classes... no more anything. She was a mother for all intents and purposes. A 13 year old homeless mother on a strange world with no food.
Advertisement:

Survivors is a Supergirl (2015) For Want of a Nail fanfic by SpeedForce 1229, author of Call Me Kara.

An escape pod lands on Earth with a 13 year old girl and a one year old boy as its passengers. The two have only minutes before they are being chased by a species they do not know or trust, humans. Kara runs across the country with only one goal in mind, fulfilling her oath to her mother and keeping Kal El alive while trying to deal with powers that are becoming out of control.

The complete story can be read here

Nothing to do with Survivors.

Megan: Is it true? Are you... Kara Zor-El?
Supergirl: I used to be. That girl died on Krypton. I think just Kara works now.