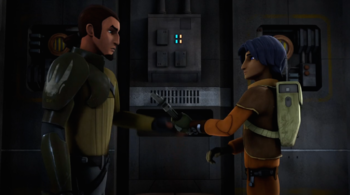 Careful where you point that thing, Ezra...
"When the Empire's operations are targeted on an ongoing basis, it could signify more than the theft of a few crates; it could signify the spark of rebellion. Next time they make a move, we'll be waiting for them — to snuff out that spark before it catches fire."
— Agent Kallus
Advertisement:

Set fourteen years after the end of the Clone Wars and the rise of the Galactic Empire, we are introduced to Ezra Bridger; a fourteen year old Force-sensitive orphan living in an abandoned communications tower on the Outer Rim planet Lothal. Upon witnessing a group of rebels led by Kanan Jarrus, a former Jedi Padawan who survived the destruction of the Jedi Order, hijacking a small Imperial speeder convoy, Ezra decides to help himself to some of the supplies being stolen. After being pursued by Imperial troops and TIE fighters, and with more Imperials closing in, Kanan offers Ezra a chance to escape aboard the rebels' ship, the Ghost. Ezra accepts, a choice that ends with him becoming part of the rebel crew as they are trying to rescue Wookiee slaves that are being taken by the Empire to the spice mines of Kessel, and brings him into the crosshairs of Agent Kallus of the Imperial Security Bureau.