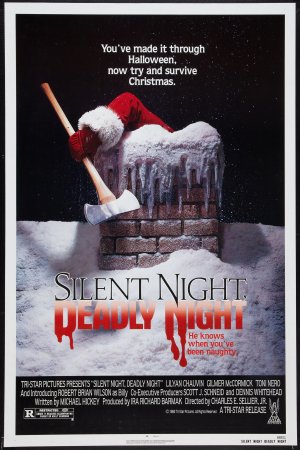 On the way home from visiting his institutionalized grandfather (who warns him that Santa punishes naughty children severely), little Billy Chapman witnesses his father being shot to death by a drunken criminal dressed as Santa, who kills Mrs. Chapman by slitting her throat after trying to rape her moments later. Placed in an abusive orphanage with his younger brother, Billy has puritanical morals drilled into him by the tyrannical mother superior. Growing up, Billy eventually gets a job at a toy store but, when the Christmas season comes roaring in, he ultimately snaps and, believing himself to be jolly old Saint Nick, goes around murdering people he deems naughty (essentially everyone).

After being in Development Hell for years, a loose remake simply called Silent Night (2012) was completed in 2012; it stars Malcolm McDowell, Jaime King, Donal Logue, and Ellen Wong. Another remake is set for release in 2022.