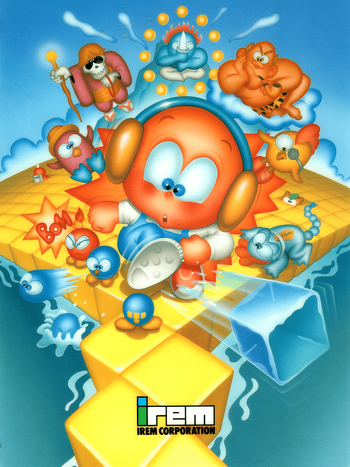 Kickle Cubicle (known in Japan as Meikyū Jima, "Labyrinth Island") is a top-down action puzzle game by Irem that was released for arcades in 1988 and for the Nintendo Entertainment System in 1990. The game's hero Kickle goes around levels freezing enemies and setting up ice pillars on his mission to collect Dream Bags.
Advertisement:

The premise of the NES version (the arcade version has a different plot) is that the Wicked Wizard King has turned the Fantasy Kingdom into ice, captured its palaces and princesses, and locked the people inside Dream Bags, leaving it up to Kickle to liberate the kingdom's four lands (Garden Land, Fruit Land, Cake Land and Toy Land) from icy slumber.