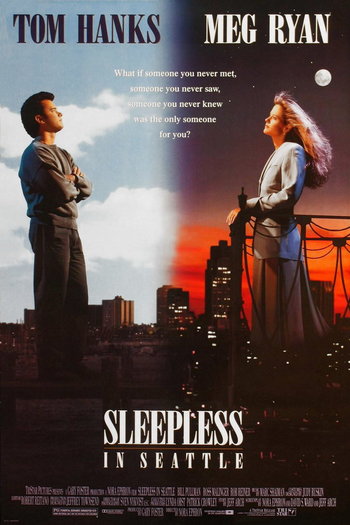 Annie: [watching An Affair to Remember] Now that was when people knew how to be in love. They knew it! Time, distance... nothing could separate them because they knew. It was right. It was real. It was...
Becky: A movie! That's your problem! You don't want to be in love. You want to be in love in a movie.
Advertisement:

A 1993 Sleeper Hit* We know: Ba-dum tsshh! which infused a fluffy Romantic Comedy with a degree of Postmodernism. As director/co-writer Nora Ephron put it, "Our dream was to make a movie about how movies screw up your brain about love and then if we did a good job, we would become one of the movies that screwed up people's brains about love forever." The film stars Tom Hanks and Meg Ryan, in their second screen pairing (preceded by Joe Versus the Volcano and followed by You've Got Mail).

Hanks is Sam Baldwin, a recently-widowed architect from Chicago who's trying to start life anew in Seattle with his eight-year-old son Jonah (Ross Malinger). Jonah's idea for helping his father find a new wife involves calling a radio talk show on Christmas Eve and putting Sam on the air. Annie Reed (Ryan), a Baltimore news reporter who's engaged to the pleasant-but-bland Walter (Bill Pullman), happens to tune in to the show and falls in love with Sam. Sam and Annie then spend the rest of the movie trying to find reasons not to meet. You can guess what happens at the end.