Film / The Shop Around the Corner 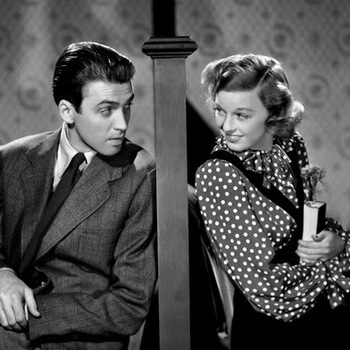 A classic 1940 Romantic Comedy from legendary director Ernst Lubitsch, The Shop Around the Corner stars James Stewart and Margaret Sullavan as bickering co-workers in a leather goods store who are also (unbeknownst to them) pen pals in love. Set in Budapest, Hungary, since it was based on the play Parfumerie by Hungarian author Miklós László.

Remade in 1949 as the musical film In the Good Old Summertime, starring Judy Garland and Van Johnson and set in Chicago in The Gay '90s. Adapted as the Broadway musical She Loves Me in 1963. Remade again in 1998 as You've Got Mail with Tom Hanks and Meg Ryan, with newfangled technology like email and instant messaging.