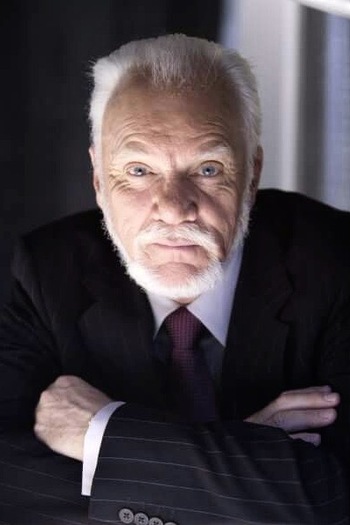 "The best thing I did was abuse myself when younger – I dabbled in everything, cocaine, booze, women – because now I don't have to do it anymore."
Advertisement:

He has a reputation for playing villainous characters, including his Star-Making Role of Alex DeLarge in A Clockwork Orange; the title role in Caligula; Tolian Soran — the guy who dropped a bridge on Captain Kirk — in Star Trek: Generations (a part he only took because the producers let him drop that bridge); Admiral Tolwyn in Wing Commander 3, 4 and Academy; Metallo in the DC Animated Universe; and the villain of the Show Within a Show in Bolt.

Somewhere in between are Harry Flashman in the film version of Royal Flash, Mr. Roarke in the remake of Fantasy Island, and Rupert Murdoch in Bombshell.

He made his film debut in if.... (1968), and his performance in that film convinced Stanley Kubrick to cast him in A Clockwork Orange. It was the first of the so-called "Mick Travis Trilogy", followed by O Lucky Man! and Britannia Hospital, but aside from the main character's name and certain thematic similarities, the three movies aren't really related to each other.

In 2013, he appeared in some Sprint commercials with James Earl Jones, reading Totally Radical SMS texts and social media posts, and making them sound awesome.

He is also the maternal uncle of actor Alexander Siddig.

Malcolm is frequently confused with Roddy McDowall. No relation actually. And note the last name spelling.

Films and TV shows featuring Malcolm McDowell with their own trope pages include:

"I've taught you much, my little droogies."