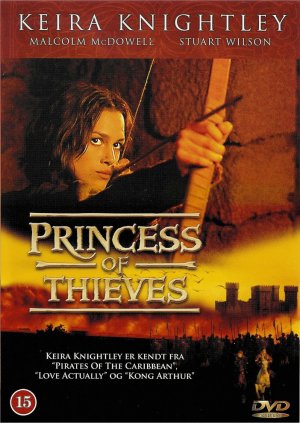 Princess of Thieves is a 2001 romantic action-adventure TV movie starring Keira Knightley as Gwyn, the daughter of Robin Hood. Co-starring in the film are Malcolm McDowell as the Sheriff of Nottingham, Jonathan Hyde as Prince John, Stuart Wilson as Robin Hood, Del Synnott as Froderick, and Stephen Moyer as Philip. The movie was directed by Peter Hewitt and filmed in Romania.

Just as Robin Hood and Will Scarlett return from their most recent Crusade, King Richard is wounded and dying. Richard's son Phillip must journey from France to England to stop the evil Prince John from assuming the throne. John's henchmen are everywhere, set to assassinate Phillip before and after he arrives. Robin and Will and ordered to safely bring him in, but they're captured. Robin's fiery daughter Gwynn (an equal to any man in archery and horse riding) disguises herself as a boy to earn her father's respect, since he forbade her to get involved because of a promise he made to her mother, the now dead Marian. After narrowly escaping death two times, Phillip and Gwynn team up to free Robin and Will and stop the Sheriff of Nottingham and Prince John.

Only shares a general subject with Robin Hood: Prince of Thieves.

Princess of Thieves contains examples of: