Film / Prisoners of the Lost Universe 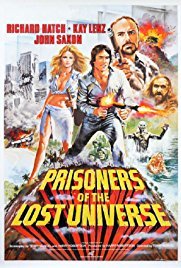 Prisoners of the Lost Universe is a 1983 British Science Fantasy film brought to you by the team behind Hawk the Slayer.

A series of disasters have sent a group of people through a trans-dimensional portal to a fantasy world. They go on a quest to find the inventor of the device so they can go home. There's just one problem: A warlord has decided to pursue our heroes, and he has an unusual affinity for Earth technology!