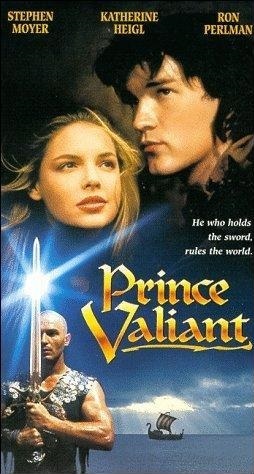 Prince Valiant is a 1997 Irish-British film directed by Anthony Hickox, written by Michael Frost Beckner, and starring Stephen Moyer, Katherine Heigl, Thomas Kretschmann, Joanna Lumley, Ron Perlman, and Edward Fox. It is a loose adaptation of the long-running Prince Valiant comic strip of Hal Foster, some panels of which were used in the movie.

A young and inexperienced squire, Valiant, masquerading as Sir Gawain, is sent to accompany the Welsh princess Lady Ilene, a guest at Camelot, on her way back home. Little does he know that meanwhile, the King Arthur's wicked sister Morgan has retrieved a spellbook from Merlin's tomb and convinced the Viking warlord Sligon, ruler of the kingdom of Thule, to steal the magical sword Excalibur during a joust tournament. Valiant and the princess become part of the struggle for the sword, which leads them both to love and Valiant to his princely destiny, as it turns out he is the rightful heir to the throne of Thule. After the usurper is killed by his also evil brother Thagnar, they must face a final confrontation with Morgan and Thagnar.