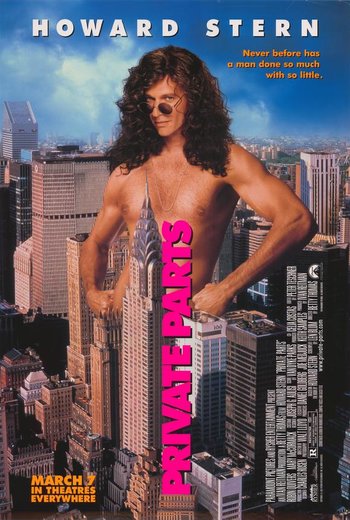 Private Parts is a 1993 book and adapted 1997 movie by Howard Stern, a mixture of an autobiographical tale from his childhood through to the the height of his career in the early '90s on The Howard Stern Show, plus various inserts detailing various aspects of his show and life. The movie adaptation focused on the autobiographical aspect.

Stern describes in humorous detail growing up a Jewish kid in Roosevelt, Long Island, NY, son to a stern radio engineer and an overbearing housewife mother. He details the turn of his neighborhood from White and Jewish middle class to blue collar Black and his parents refusal to leave and the bullying he received being one of the few Jewish and White kids left in his school.

He then proceeds to talk about his trials and tribulations chasing women (unsuccessfully mostly) from high school through college, along with experimenting with drugs and his first early attempts and entertaining people. After college, he proceeds a long of string of jobs in radio, slowly cultivating his on-air persona while collecting colleagues along the way (notably Fred Norris and Robin Quivers). The culmination of his radio career leads him to his infamous stint as the afternoon drive DJ at W EEEEEEN BC, where he has a legendary hate/hate relationship with his program director ("Pig Virus", based on real life radio personality Kevin Metheny) and rivalry with morning DJ Don Imus, while his popularity soars. He is eventually fired, but hired immediately by WXRK, and the bio parts end with him triumphant in the ratings over Imus in morning drive and briefly on his eventual syndication from there.

The rest of book is a hodgepodge of various topics, including his interactions (good and bad) with various celebrities, his opinions on various comedians, persons in the news and other topics.

The book was huge NYT bestseller, and the movie was a moderate success. Howard followed it with Miss America, and has mused various times to write another detailing his life since then.