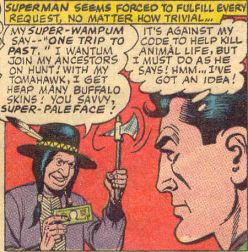 "The way this guy's talking, I don't know if it's supposed to be some sort of racist caricature or if he's brain damaged somehow..."

A variation of You No Take Candle, but one which applies specifically to Native Americans. For decades (if not centuries) Native Americans were portrayed in fiction speaking a form of pidgin English characterised by the phrases "heap big," "ugh," and "how," and verbs conjugated with "um." Trains are referred to as "iron horses," white people as "palefaces" (who speak with forked tongue), a baby as a "papoose," the tribal leader as "Big Chief," money as "wampum," and whiskey as "firewater."note In Spanish -in humoristic depictions- there's something similar too (the You No Take Candle style), with them conjugating verbs just in infinitive as well as knowing stuff as trains or whiskey as mentioned before.

While most assume that this is just some baloney stereotype invented by ignorant racists, it was actually originally Truth in Television. In the 17th century, Native Americans adopted a pidgin now called American Indian Pidgin English (AIPE) in order to communicate with white people and members of other tribes. Here are a few recorded real-life examples of AIPE:

Advertisement:
Good Indian, me. Heap good Indian, hunt buffalo and deer.
— Ottawa, Oglala Sioux war chief
You silly. You weak. You baby-hands. No catch horse. No kill buffalo. No good but for sit still, read book. Never mind. Me like. Me make rich. Me make big man. Me your squaw.
— A Native American woman proposing to a white man

Straight usages of this trope have fallen out of favor due to racial sensitivity (and due to the language barrier that AIPE was meant to bridge simply not being there anymore, since the vast majority of Natives are raised on actual, fluent English these days), although it is parodied. A common gag involves a white (or otherwise non-indigenous) character speaking to a Native American in this manner on the assumption that this is how all Native Americans talk, only to receive a bemused response in perfectly articulate English.

Occasionally you may even find someone so ignorant as to think this is the Native American accent, which is incorrect, as the accent that Native Americans had before the colonists arrived is the very one that non-native Americans adopted and now speak.

See Asian Speekee Engrish for the Asian equivalent, and Stereotypical South Asian English for the South Asian equivalent. Related to Braids, Beads and Buckskins. Sometimes the dialect of choice for the Magical Native American or, for extra-special Unfortunate Implications, The Savage Indian or Hollywood Natives.

See also Elective Broken Language, for when a Native American can speak English perfectly and just fakes this trope, either for making fun of white people's stereotypes or for Obfuscating Stupidity.