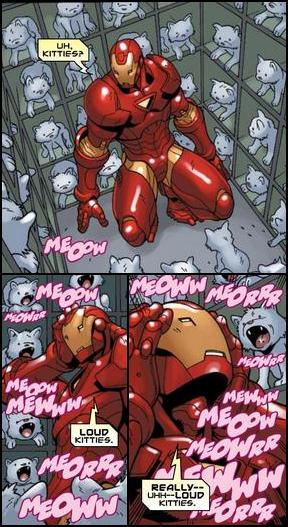 Usually, this trope is used for comedic effect, because it's hard to see it coming.

An extremely cute and/or tiny animal turns out to have a surprisingly loud cry. A gorgeous person has a voice that is grating beyond all possible belief. It often causes fear in other characters until one sees the speaker and is amazed such a horrifying noise could come out of something so innocuous.

This trope is the flipside of Killer Rabbit, wherein the cute thing looks innocent, fluffy and harmless, but is actually vicious and deadly. Note that some Cute but Cacophonic animals are also Killer Rabbits. Beware the Cute Ones.

Truth in Television, as anyone who has ever encountered a chihuahua must know. Also, having a surprisingly loud cry to scare the crap out of predators is a terrific defense mechanism if you are a tiny, cute animal who can't do much else. Some animals combine this with the ability to seemingly suddenly transform into a vicious monster. Either way, it isn't good for a predator's nerves.

A common trait of Mister Muffykins, particularly the older, nastier versions. A Cat Concerto can induce this, especially at nights. Not to be confused with Noisy Nature. Everyone is louder than they need to be in Noisy Nature.

In anime, this can combine with a Noblewoman's Laugh for a truly fearsome effect.

See also Loud of War. Sub-Trope of Vocal Dissonance, and often the result of No Indoor Voice. Not to be confused with a Silly Animal Sound. If the sound rises to the level of a weapon in itself, see Make Me Wanna Shout. Contrast Beautiful Singing Voice.

For Real Life examples, do not add people as examples of this trope.

Although Augie Doggie is an adorable puppy, her singing is so bad it makes Granny Sweet flatline.

Although Augie Doggie is an adorable puppy, her singing is so bad it makes Granny Sweet flatline.