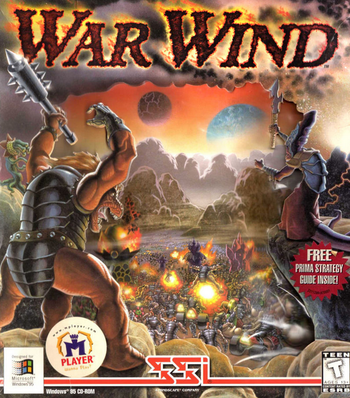 War Wind is a somewhat obscure Real-Time Strategy game developed by DreamForge Intertainment [sic] and published by Strategic Simulations, Inc for Windows PCs in 1996. The game was highly reminiscent of Warcraft II: Tides of Darkness which was then at the height of its popularity. Despite obvious imitation of Warcraft II and not-too-polished gameplay, the developers managed to recreate some of Warcraft II's charm, as well as add many interesting things of their own.
Advertisement:

The setting of the game was a hybrid of sci-fi and fantasy, taking place on an alien world of Yavaun, home to no less than four sapient species. The first one of them were the Tha'Roon, purple-skinned snakelike humanoids who were quite intelligent but preferred to have underlings to do most of the dirty work for them. To that end they struck an alliance with roughly humanoid (but with some beastlike features) Proud Warrior Race Guys called the Obblinox, who became their empire's military wing, and enslaved the half-plant, half-animal Eaggra to become their workers and architects. This went well for the Tha'Roon for quite some time until the Eaggra managed to rebel against their oppressors led by a few capable leaders and began to wage a guerrilla war against the Tha'Roon and the Obblinox. The Obblinox, too, grew unhappy with the conflict because at first they thought the Eaggra too weak to be considered a worthy opponent for them. They also began to question the legitimacy of the Tha'Roon's rule. The fourth side in the conflict were the Shama'Li, a race of cute, tribal humanoids that preferred to stay out of conflict and instead preserve ancient teachings. Their goal is to make sure that all the intelligent races of Yavaun survive. To that end they want to summon a mysterious god named NagaRom.

The gameplay was, for the most part, similar to Warcraft II, but with some notable differences. For example, instead of "training" your units at the barracks, you had to build an inn and wait until someone appeared there to be hired. Only three types of units could be hired from an inn - workers, mercenaries, and heroes. All other unit types - namely, advanced workers, scouts, warriors and spellcasters, as well as their advanced versions - had to be created by upgrading your workers. Yes, instead of the easy and convenient system employed by most RTS games, where once an upgrade is researched, it is automatically applied to all units able to receive it, here you had to upgrade each of your soldiers manually. This means that your army is bound to be very small and takes a lot of time to train. Mercenaries - something like non-upgradable melee cavalry - were only effective in early missions.

The game's single-player scenarios and campaign missions were often designed to play like puzzles. There was always some kind of obstacle to your goal - limited tech tree, scarce resources, or a maze full of monsters or traps, and it was your goal to figure out a solution. Unfortunately, many missions were quite unforgiving to mistakes, and you could easily end up in an unwinnable situation if you made a wrong decision.

The game also introduced the concept of Clan Leader, a unique unit that was present in every mission and basically represented the player on the battlefield. If the Clan Leader died, the mission was lost. Each race's Clan Leader had some unique special abilities, for example, the Eaggra Clan Leader could harvest resources and construct buildings like any other worker, and the Shama'Li Clan Leader could learn the same spells as their race's spellcasters. The Clan Leader also had some other abilities to manage your economy. There are also neutral monsters. Some attacked you on sight but stayed in plain view, like the Snipethorn, others disguised themselves as trees or rocks before attacking you. The Dinge Vermin did not attack you but stole resources from your courthouse (read: Town Hall). Then there were the rhino-like Bonca, who were normally non-aggressive, but packs of their young often roamed nearby and could attack your buildings. If you retaliated, they started to squeal, and any adult Bonca nearby also charged you.

In 1997, a sequel to War Wind was released, called War Wind II: The Human Onslaught. The Shama'Li failed to summon NagaRom, but the Eaggra managed to overthrow the Tha'Roon and the Obblinox. The two races allied to form a faction called S.U.N. (Servants Under NagaRom). The Tha'Roon managed to come to terms with the Obblinox, and together they also created a faction called the Overlords. Over time, the Overlords managed to gain an enormous technological edge over the S.U.N., and once again they went to war with them. The defeat of the S.U.N. seemed assured if not for the sudden arrival of humans from Earth, who proceeded to fight the Overlords, giving the remnants of the S.U.N. time to escape. The humans also split into two factions, the Marines who wanted to conquer Yavaun, and the scientists (called the Descendants) who wanted to return to Earth.

The original game can be bought on GOG.com, but is also available

on the Abandonware websites.