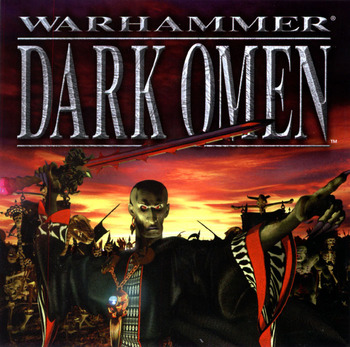 "You're going into Hell, Bernhardt!"
"I was born there. And call me Commander!"
—Matthias & Commander Bernhardt

Warhammer: Dark Omen is a 1998 tactical Real-Time Strategy game for PC and Play Station, set in the Warhammer universe. It is the sequel to the earlier Shadow of the Horned Rat and features captain Morgan Bernhardt and his mercenary company the Grudgebringers as they seek to defeat the Zombie Apocalypse of the Dread King.

The game takes you through a series of missions, fighting against both the Undead and greenskins. The game is infamously hard, owing mainly to the fact that your army is persistent: Any losses have to be recouped, and since the amount of money you get from completing missions is finite, you can easily end up in a negative loop (where you fail to make enough money to recoup your losses, making it harder to make more money and you sustaining even bigger losses...) Any regiment wiped out completely is also Killed Off for Real. While the game is mostly linear it offers a few "Side missions", that gives you additional rewards (usually bonus regiments) but usually make various battles harder once you get there (as the enemy has more time to prepare)

See Warhammer for the tropes owed to the universe itself.