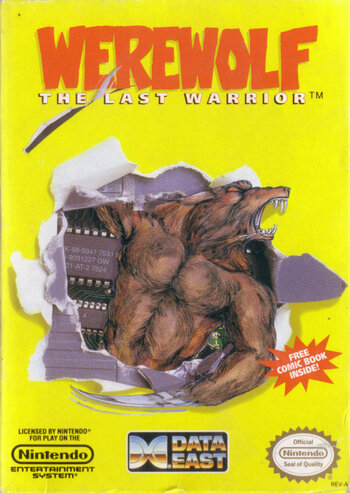 "A new and malignant presence has captured the planet. Led by their mad creator, Dr. Faryan, a band of bio-monsters has imprisoned nearly the entire population. Every weapon tried against them has proven useless. Only one man has the power to stop Faryan. Werewolf is all that stands in the way of the destruction of our planet. You alone can restore order to the world. You alone are... the Werewolf."
— Opening Scroll (English version)
Advertisement:

Werewolf: The Last Warrior is a side-scrolling Platform Game published by Data East exclusively for the Nintendo Entertainment System.

The game takes place in an unspecified point in the future on a planet known as Red Earth, the second world to be colonized by humanity. On Red Earth, Dr. Faryan (called Dr. Gordon in the Japanese version) ventures into a cave and awakens an ancient evil that turns him into an evil being. Using his newfound abilities, Faryan creates mutated beast-men to serve as his minions, and imprisons nearly everyone on Earth. The only hope for humanity is a man (called Ken in the Japanese version but unnamed in the English version) who, with the help of his spirit guide, can transform into a werewolf.