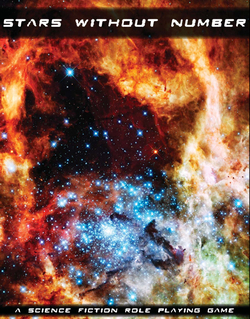 In the distant future, humanity has spread to distant stars with the spike drive, which allows hyperspace travel. Not easy hyperspace travel—fail to keep it under control and your death will not be fun—but hyperspace travel nonetheless. While the Terran Mandate ruled the galaxy until a few centuries ago, a psionic disaster known as the Scream rippled across the galaxy and shattered society, killing massive numbers of humans and aliens and throwing the galaxy into chaos. Only recently have ships begun to ply the space lanes again, and with the psionic-aided jump gates no longer usable, very little large-scale shipping between the systems is viable. Small groups of explorers scout out systems to find technology and resources left behind by the pre-Scream culture, and numerous factions wage war for dominance of their petty kingdoms. It's up to the players to write their legends on this clean slate.

Of note is its retro-inspired sandbox playstyle; it was written so that dungeon modules from other games could be grafted into a session with less than twenty minutes' work by, say, replacing Orcs with Hochog mercenaries and setting it on a space station instead of a dungeon complex.

A free version of the core book is available here

. Second Edition rules, which keep much the same lore but update the class and skill systems are available here

Tropes present in the system as a whole: