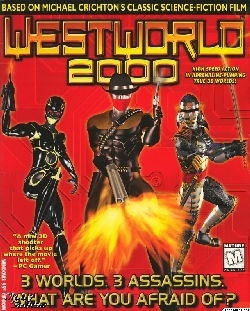 Westworld 2000, the amusement park of the future, is a 3D first-person shooter developed by Brooklyn Multimedia and published by Byron Preiss Multimedia Company, Inc. in 1996. It is based on the sci-fi film by Michael Crichton.
Advertisement:

The player can choose to be a samurai warrior, a gunslinger, or an intergalactic spy, depending on which world (Samuraiworld, Westworld, Orbitworld) the player is entering. The player's task is to shut down Westworld 2000, combating malfunctioning robots along the way, through 35 different levels with 11 weapons from the past, the present, and the future.