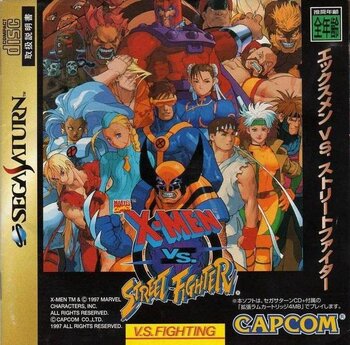 THIS IS X-MEN VS. STREET FIGHTER!
In both X-Men: Children of the Atom and Marvel Super Heroes, Capcom inserted one of their characters (Akuma in X-Men, Anita in Marvel Super Heroes) as Secret Characters. Street Fighter Alpha featured a hidden fight wherein Ryu and Ken faced off 2-on-1 with M. Bison. Sensing the potential for a moneymaker in those two disparate ideas, Capcom soon developed a full-fledged multimedia crossover with a tag team focus, and in 1996, it unleashed X-Men vs. Street Fighter.
Advertisement:

The 17-character playable roster is composed of Cyclops, Wolverine, Rogue, Storm, Gambit, Sabretooth, Juggernaut and Magneto in the X-Men side; and Ryu, Ken, Chun-Li, Charlie, Dhalsim, Zangief, Cammynote in her Shadaloo costume, way before it was properly introduced in Street Fighter Alpha 2 Gold, M. Bison, and (not-that-hidden character) Akuma in the Street Fighter side.

XvSF introduced the tag-team fighting dynamic that became the trademark for the Capcom vs. series of games: players choose two fighters, then switch between them on the fly in the middle of battle. This removes the usual best-of-three-rounds structure started by Street Fighter in favor of a one-round fight, as the fight ends when one side loses both fighters. Each teammate has their own lifebar, and when switched out, the inactive fighter will heal some of the damage they've taken until called back into action. The game also allows players to use a two-person Hyper Combo where both fighters on a team perform a Hyper Combo at the same time for massive damage... provided the team still has both fighters available, of course.

The game had a non-existent story to back up the action; a player's chosen team would simply fight their way through various CPU-controlled teams before facing down a gigantic version of X-Men villain Apocalypse. (Storm's ending implies that Apocalypse has been abducting mutants and street fighters alike for undisclosed reasons, probably to experiment on them or force them to join him.) After defeating Apocalypse, the player fights against the tag partner using whatever character landed the final blow during the boss battle, and if the player wins, they see that character's ending.