Head in a Vise 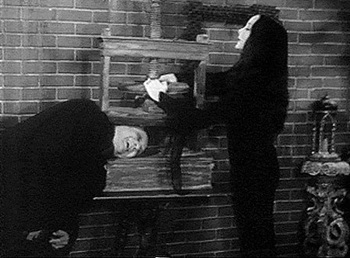 Nothing like crushing one's head like an egg to relieve a pain in your neck.
Harold: Hey, Billy-boy. How was school?
Billy: Not good. I feel like I spent the whole day with a clamp on my head. I need a nap.
Gladys: Should we tell him that he does have a clamp on his head?
Harold: Now where's the FUN IN THAT?!
— The Grim Adventures of Billy & Mandy, "Spidermandy"
Advertisement:

When someone proclaims that they feel like their head is in a vise (or vise-grip), they are usually being hyperbolic, using the term as creative language to describe the anguish their migraine is putting them through. Sometimes fiction likes to take this figurative phrase and make it literal, putting a person's bare head into a vise or a screw press as a form of torture.

Half the time the trope is Played for Laughs, the victim Too Kinky to Torture and finding strange pleasure in getting his skull crushed.

The Grim Adventures of Billy & Mandy

Billy comes home from school with a clamp on his head in "Spidermandy".

Alternative Title(s): Head In A Vice

The Grim Adventures of Billy & Mandy

Billy comes home from school with a clamp on his head in "Spidermandy".