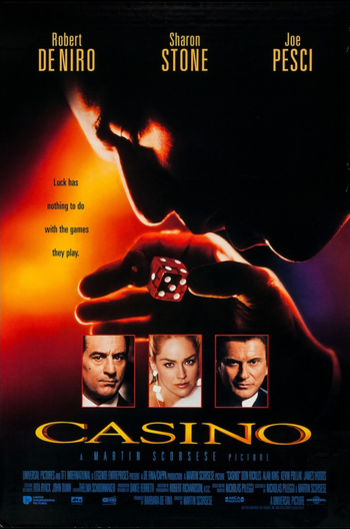 No one stays at the top forever.
"When you love someone, you've gotta trust them. There's no other way. You've got to give them the key to everything that's yours. Otherwise, what's the point? And for a while, I believed, that's the kind of love I had."
— Sam "Ace" Rothstein
Advertisement:

Casino is a 1995 crime drama film directed by Martin Scorsese, starring Robert De Niro, Joe Pesci and Sharon Stone, who earned a Golden Globe and an Academy Award nomination for her role as Ginger.

Until the early 1980s, The Mafia had a huge stake in Las Vegas. But while they ran the casinos, they didn't run the town. They had to use fronts to get their men in to run everything. One of these fronts is Sam "Ace" Rothstein (De Niro), a Jewish gambling prodigy who, having made big money for his Mafia associates in the past, is sent to Vegas to run the Tangiers casino-hotel for the Chicago Outfit. Rothstein, a ruthlessly logical and efficient character, soon turns the Tangiers into a successful and profitable organisation for the Mob bosses, but things start to go shaky when Rothstein falls head-over-heels in love with Ginger (Stone), a beautiful and seductive but manipulative and troubled casino hustler, and when Rothstein's old friend Nicky Santoro (Pesci) arrives in town. Santoro, a psychotically hot-headed mobster, is sent by the bosses to watch over things and make sure no one interferes with Rothstein's operation, but soon decides to make Las Vegas his personal kingdom, bringing much undesired attention on Rothstein himself and creating tension between the two men that will end up bringing the whole thing crashing down on top of them.

The film is loosely based on the story of Frank "Lefty" Rosenthal, who unofficially ran four casinos for the Chicago Outfit and who served as the inspiration for the Rothstein character, as well as Anthony "Tony the Ant" Spilotro, a Chicago Outfit enforcer who had ambitions of becoming boss of his own crime family and was the inspiration for Santoro's character. Although the film isn't an exact account of what happened (a lot of that is Artistic License), it does provide a good overview of it

Nicholas Pileggi explained in interviews that Casino was deliberately meant as a continuation of not only Goodfellas but also Mean Streets. Together, they cover the Myth Arc of the mob reach and influence in America with Serial Escalation since Mean Streets shows the very bottom, small-time hoods, Goodfellas shows the middle-class Stepford Suburbia gangsters, and Casino shows the very high rollers of the mob, at the top level and indeed the source of their economy.

This film provided examples of:

And that's that.
Feedback