Western Animation / The Rescuers Down Under 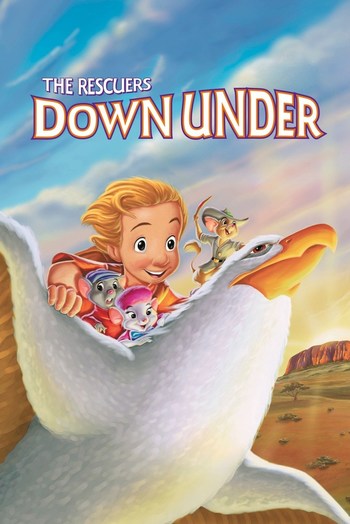 An adventure above the ordinary... in the land down under!
Advertisement:

The Rescuers Down Under is the 1990 sequel to Disney's 1977 film, The Rescuers. It is the 29th entry in the Disney Animated Canon and is also the first sequel to one of their previous films and would be the only sequel in that canonnote not counting Fantasia 2000, which is less of a sequel and more of a spiritual continuation of the original until 2018, when Ralph Breaks the Internet came in. Bob Newhart and Eva Gabor reprise their roles as Bernard and Miss Bianca, being the last performance for Gabor before her death in 1995.

Set in the Australian Outback, the Evil Poacher McLeach (George C. Scott) has kidnapped a young boy named Cody (Adam Ryen) in order to snare Marahute, an endangered eagle large enough to ride around on. Naturally, Bianca and Bernard must come to the rescue, with help from Orville's brother Wilbur (John Candy) and Jake (Tristan Rogers), the mouse equivalent to Crocodile Dundee. Down Under was also a pioneer in the use of CGI. Unlike the first film, which was a huge success, Down Under actually failed at the box office, making it the only true failure of the Disney Renaissance.

Disney was facing a future with computer animation rapidly changing the state of the art. They used the movie as a test bed of their new CAPS coloring system — instead of hand-painting cels, you could now use a computer program to color the animation. This saved a considerable amount of time and hand-drawn animation was now easier to integrate into CGI backgrounds and effects (and also allowed for extensive use of Cel Shading). In Down Under, the test run of this system had mostly decent, sometimes amazing (especially during Marahute's flight), and sometimes mixed results. They had mastered it brilliantly by the time of Beauty and the Beast, the following year.

The film was accompanied in its theatrical release by the animated featurette The Prince and the Pauper (appropriately enough, the final Disney short to use cels) based on the story by Mark Twain and starring Mickey Mouse and friends.