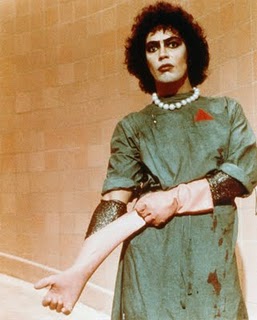 I snap my glove and SCARE MYSELF!
"But if I weren't a scout, a doctor I would be! Bend down, touch your toes, this won't hurt a bit!"
— "If I were not a... scout", campfire song.
Advertisement:

When the Mad Doctor is ready to "operate", this almost always includes shoving his hands into big latex gloves with a thrusting motion while tugging on the back of the glove with the other hand; then there's a loud snap at the end when the back of the glove is released. Usually done with the forearm facing upward, though downward-facing variations exist too. Pretty much a Mad Doctor and Medic staple, and also pretty common in cartoons. Usually meant to inspire fear or to startle; usually part of the Creepy Physical.

Compare Gloved Fist of Doom. Also see Ass Shove, which frequently uses this as a family-friendly suggestion. Not to be confused with the Glove Slap.

The Medic prepares for battle, complete with iconic glove snap.

The Medic prepares for battle, complete with iconic glove snap.