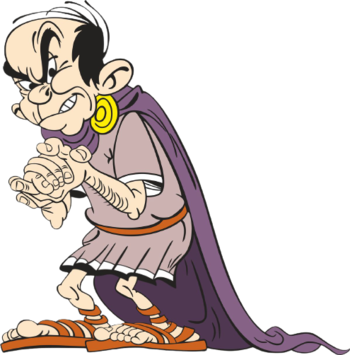 MWAHAHAHAHAHAHAHAHA!
"The best thing about alcohol hand gel in hospitals isn't the hygiene, but that everyone walks around like they're hatching a dastardly plan."
— Katie, Facebook comment
Advertisement:

Hand Rubbing is the act of rubbing the palms of your hands together. The friction of the gesture can be used to provide heat in a cold environment, or it can simply convey excitation or expectation. The Other Wiki has a whole article

on the subject, but here, we will focus on rubbing hands as a trope.

There is an eerie specificity in fiction to reserve this gesture for Smug Snake type villains. Used car salesmen, lower-end Corrupt Corporate Executives and the Dastardly Whiplash will gleefully rub their hands when things are going their way, but a true Magnificent Bastard always opts to clasp his hands instead. In a bygone age, it was also the signature habit of the Greedy Jew. Even when otherwise positive characters do this, there's nearly always a sinister undercurrent.