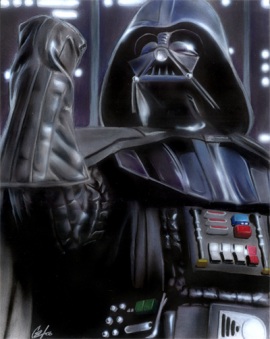 If you only knew the POWER of the dark glove!
Advertisement:

When the Big Bad wants to visually flex his power, he shoves his hands into big (usually black) gloves with an upward thrusting motion, then makes an evil fist (although a clawed semi-fist, as if clutching something unseen, is sometimes also done). Putting on the gloves while doing this can be optional (in an upward move similar to a Glove Snap). Actually wearing gloves while making the gesture can be optional, but the gloves seem to add gravitas to the move. For extra points, we get a scrunchy-leathery-rubbery sound effect as the fist is clenched.

Pretty much a Mad Scientist staple, but the fisted glove is also a trope of megalomaniacs in general, showing off their power.

Could also be an Evil Hand, and include a Fist of Rage. When it's a Mad Doctor performing it, it might also include a Glove Snap. When the heroes do it, it's a Bicep-Polishing Gesture. Compare Milking the Giant Cow. Not related to a Victory Fist Pump, though it may be related to the anime Fist Pump. Not to be confused with Giant Hands of Doom. Also not to be confused with the Power Fist. Or the Black Power Fist.