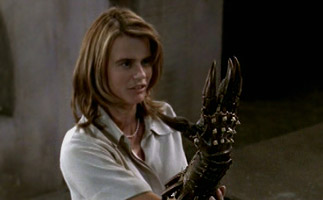 I love the Myneghon Glove. It's so bad.
Buffy: How are you?
Faith: Five by five.
Buffy: I'll interpret that as good.
Advertisement:

Gwendolyn Post shows up as Faith's new Watcher. She is British, strict, arrogant, and looks down on all the Scoobies and especially Giles. Despite this, Faith starts to like and trust her. She warns that the demon Lagos is in Sunnydale looking for the Glove of Myneghon, a powerful gauntlet which controls lightning.

That night, Xander spies a very much alive Angel and Buffy sharing an ill-timed kiss. Xander snitches to the rest of the Scoobies about Angel's resurrection, and they stage an intervention for Buffy. Xander and Cordelia are firmly against the idea of Angel being back, still scared by the recent memory of Angelus' actions, while Willow (and by association, Oz) are less sure. Giles ultimately comes to Buffy's defense, but in private scolds her for keeping the secret and says that she has no respect for him or his job as a watcher.

Xander then tells Faith about Angel, they agree that she should go to his mansion to kill him, as it's not clear whether or not Angel has his soul. Gwendolyn also shows up at the mansion and knocks Angel's lights out. When Buffy shows up, Post convinces Faith that Buffy and Angel are working together for the greater bad, and the two slayers erupt into a vicious fight.

Gwendolyn Post takes this opportunity to retrieve the glove, revealing her true intentions all along. Buffy cuts off her hand, severing the glove and frying Gwendolyn. The Scoobies are still wary of Angel but trust Buffy's judgment. Buffy goes to Faith's apartment and tries to convince her that she's still on Faith's side. Faith, her face still bruised from Buffy's fist, announces. "I'm on my side." The Scoobies have just lost a member for good.