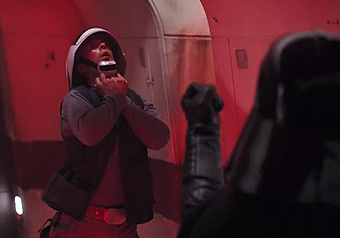 Vader's assault on the Rebels hits a choke point.
Admiral Motti: Don't try to frighten us with your sorcerer's ways, Lord Vader.
[Vader turns and slowly walks toward him]
Admiral Motti: Your sad devotion to that ancient religion has not helped you conjure up the stolen data tapes, or given you clairvoyance enough to find the Rebels' hidden fort—
[Vader raises his hand, and Motti suddenly starts gasping for air and tugging at his collar]
Darth Vader: I find your lack of faith disturbing.
— Star Wars: Episode IV — A New Hope
Advertisement:

Also referred to as a "Force-choke".

Sometimes, a villain will demonstrate his (or her) power by having another character's life in their literal hands, via a Neck Lift.

Sometimes, a villain will demonstrate a lot more power by doing this with no visible effort, by doing it with the mind. That's this trope.

Characters are frequently terrified and intimidated (not unduly so) by having a character with psychic powers, a Hair-Trigger Temper, and being the target of that wrath. This trope is a great way to show that the villain could literally end another character's life with a thought, but doesn't.

A sub-trope of Neck Lift and Supernatural Suffocation. Often accompanied by a Pstandard Psychic Pstance or Magical Gesture. A Death Glare is optional.