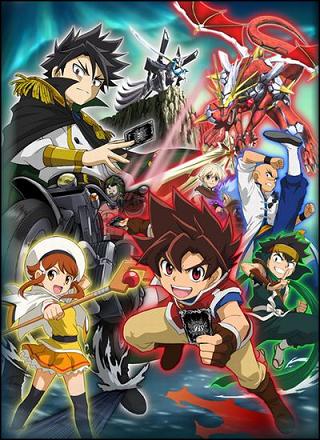 Battle Spirits Sword Eyes is the fifth Battle Spirits anime. It premiered on September 9, 2012, and airs at 7 a.m. Tokyo time during Sundays on TV Asahi. Somewhat departing from the lighter take on the setting shown in the previous series, Battle Spirits Heroes, Sword Eyes returns to a fantasy world setting, not unlike that of the second series Battle Spirits Shonen Gekiha Dan.

The land of Atlantia, the largest country of Legendia, is torn apart by riots. The young prince Yaiba, betrays his mother and ascends to the throne. Amidst the chaos, a newborn baby is taken away by a card battler droid known simply as Bringer. Now 14 years later, the skateboarding-loving boy named Tsurugi Tatewaki, finding the Sword Brave, awakens to his destiny as the Red Sword Eyes of Light. He must train to become a player of Battle Spirits and gather the remaining 5 wielders of the Sword Eyes of Light to face the Sword Eyes of Darkness who are hunting the 12 Sword Braves.