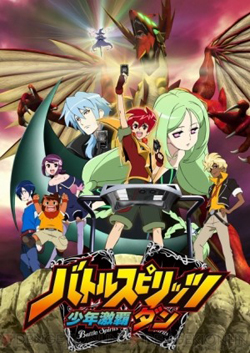 The second anime inspired by Bandai's Battle Spirits trading card game, following Battle Spirits Shonen Toppa Bashin. The series recycled certain concepts and character types from the first series, but focuses on an entirely separate cast, and has a much more serious storyline.

The protagonist, Dan Bashin, is a red-headed hero who uses the red attribute, just like Toppa of the first series. However, rather than going through a normal life, he's taken from Earth to the world of Grand Rolo, where he learns he's one of the chosen core soldiers. With the help of his friends and comrades, Zungurii, Magisa, Clackey, Mai and Suzuri, he battles to stop the evil Otherworld King.

The series was followed up by another 50-episode series, Battle Spirits Brave (named after the newest type of card at the time), wherein Dan and some of his old allies travel to the future. Because it is a direct sequel with many of the same characters, tropes for Brave are included on this page.

Following the finale of Saga Brave, a new series called Battle Spirits: Gallett's Revolution was announced. It is set in the same universe as the previous three series, albeit farther into the future and features a new protagonist named Gallett Revolt and involving a new species called Mauve.

Also see Battle Spirits Heroes, for the 4th series in the franchise.