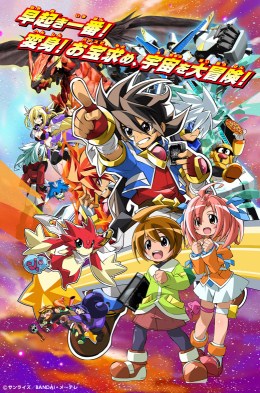 Battle Spirits Saikyo Ginga Ultimate Zero is the latest season of the Battle Spirits anime, following Battle Spirits Sword Eyes. It premiered September 22, 2013 on the usual TV Asahi timeslot. Once again, the series has been re-booted with a new setting and a new cast of characters. This time, it takes place in space.

The story features a boy named Rei, who is a Card Quester. Meaning, he's a treasure hunter in space. When he battles, he transforms into the mysterious card battler Zero, and his personality becomes a bit different depending on which color deck he uses. As an obstacle for him, there's also a guild trying to conquer space.