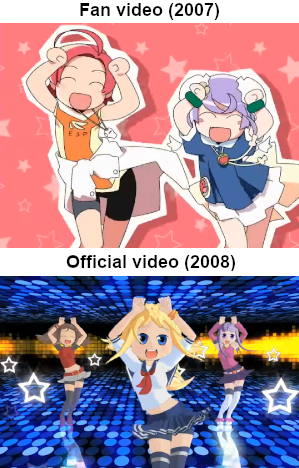 The English lyrics even say "Look at YouTube vids do it."
"Originally, I simply referred to the gentleman as Future Guy. Now that the series is over and all of the secrets have been revealed, we now know that this is...Future Guy. How sad is it that the master villain's name is derived from sarcasm?"
— SF Debris on "Future Guy" from Star Trek: Enterprise

Sometimes a meme about a work, that wasn't in the work before, catches the eye of the people responsible for that work, and they decide to actually put it in the work. Note that this is not about references to unrelated memes, which would just be a Shout-Out.

Can be an in-joke for an Ascended Fanboy character, or a Promoted Fanboy who makes sure it'll be in the show. Can also be a result of Approval of God, where the creator would approve of fanworks and memes derived from the source material.

Now just to tell if an example fits:

A Sister Trope of Ascended Fanon, Meme Acknowledgment, Continuity Nod, Mythology Gag (the latter two are references to things that were in the work).

Compare Watch It for the Meme, Appropriated Appellation, Pandering to the Base, Official Fan-Submitted Content.

Not to be confused for a work making a Forced Meme itself.