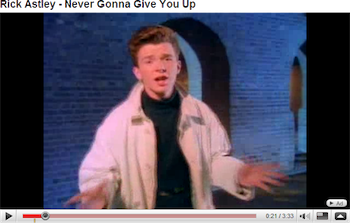 NOOO! CURSE YOU FOUL INTERNET!
"Listen, I just think it’s bizarre and funny. My main consideration is that my daughter doesn’t get embarrassed about it."
— Rick Astley
Advertisement:

is one of the most famous yet polarizing memes on the Internet. It's a classic Bait-and-Switch, where you're linked to a web page that purports to be something relevant to whatever you're reading, only to click on it and find yourself watching the music video of British singer Rick Astley's 1987 pop hit "Never Gonna Give You Up"

How did it become so popular? It's simple, it's mostly harmless, and the song itself is a noted Ear Worm. That said, several have found ways to avoiding it — they either simply checked the copyright info on the YouTube link to see if it featured the song (or "content from Rick Astley Official Channel"), or memorized the YouTube link for it.

It grew to be more than just an Internet meme, though; it was one of the few memes to break out of the Internet and into general popular culture. People were trying this in Real Life, trying to foist the video (or even a live performance of the song) on large public gatherings. Newspaper articles were even written about the phenomenon, to the point where discussions of the song on its own merits as a song were very rare. It also means that Rick Astley himself was very much aware of the meme (he was quite baffled by it and starting to get really annoyed that it's all anyone ever wants to ask him about, but he eventually grew to accept and embrace it).

So who started it?

Like a lot of memes, it started on 4chan. It's actually a variant of the duckroll

, which consisted of links to a picture of a duck on wheels

◊. Duckrolling was actually part of a particularly elaborate trolling method where the point of the link was to send you to a post in another thread — such a redirect forced your browser to load the entire thread, which was super annoying, and there wasn't any easy way to distinguish such links from links to other posts within the thread (which were much easier on your browser). The duck would be in the post you linked to, and its entire point was to remind you that you got pwned.

That being said, no one's certain exactly how it transitioned to the Rick Astley video specifically. It may be a reference to an earlier joke involving the song. One possible candidate is Nick Lowe's song "All Men Are Liars", which mocks Astley and at one point transitions into the chorus of "Never Gonna Give You Up"; another is Mystery Science Theater 3000, which included the song in its riff on Attack of the Eye Creatures because a character resembled Astley. One factor is probably the lyrics of the song itself, with Rick professing how he will never tell a lie in one line. Whatever the case may be, there's almost certainly an "in-joke" element to it, as there is with many Internet memes; part of the point is to make you ask, "of all things, why that?"

The first victim of the Rickroll is commonly believed to be Kylie Minogue — but in a very meta sense. She and Astley were both members of the Stock Aitken Waterman hit factory back in The '80s. Apparently, they rushed through the production of her song "I Should Be So Lucky" because Astley was supposed to use the studio to record later that day. Looking at the production dates, it's not impossible to believe she was the first person to have been sidelined by a performance of "Never Gonna Give You Up". Despite the popularity of this video

, the first Rickroll victim was not Bill O'Reilly.note In fact, what caused him to walk off his set was a video by Sting, which is probably much more poetic, but less meme-tastic.

And where can we see it outside its natural habitat?

In fact, the meme now automatically makes any previous use of the song Hilarious in Hindsight, if not thought of as an Ur-Example of the meme (like the Mystery Science Theater 3000 example).

Variants of the Rickroll

At this point, the Rickroll is big enough that it would be more effective to do some unexpected variant of it.

Because that's not how the Internet works. That doesn't mean they haven't tried; it was removed for brief periods in 2010, 2014, and 2015. The 2015 removal might have had to do with British cellular provider Virgin Mobile using the song in a number of their commercials, some of which include Astley himself. The Vevo upload of the song has remained on the website untouched since 2009, as Vevo is a joint-venture between Google and several major music companies. Claiming that YouTube has taken it down is, of course, a good way to get people to go check on it, thus unconventionally Rickrolling them.

Enjoy the Rickroll, everyone — it's preferable to the Screamer Prank.