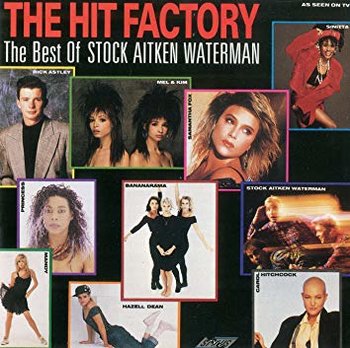 The British 1980s in a nutshell
Advertisement:

To put it bluntly, Motown for white people.

A music production company based in Britain, this team composed of Mike Stock, Matt Aitken, and Pete Waterman took most of the world by storm throughout the 1980s and early 1990s for it's then-unique dance pop sound which fused Hi-NRG, Eurobeat, and Motown.

Prior to SAW's foundation, Waterman was producing quite a few hits of his own under his Pete Waterman Limited (PWL) production company, such as the iconic "You Spin Me Round (Like a Record)" by Dead or Alive, which hit number 1 on the UK sales chart. Since then, they have made many other newcomers big stars, including Bananarama, Sinitta, Kylie Minogue, Jason Donovan, and Rick Astley.

Often despised and reviled by detractors who saw SAW as synthetically manufactured music, "Schlock, Ailing and Watered-down" was the least of the invective the trio attracted.