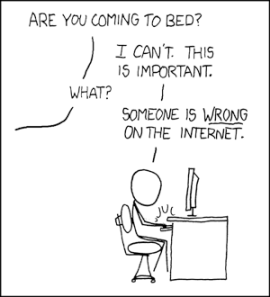 TV Tropes is not the place to do it.
Advertisement:

All right, so there's this character everyone else in the fandom is ga-ga over, and you hate their guts. It bewilders you how people could be so excited about Alice and Bob finally getting together after 8 seasons of Unresolved Sexual Tension, given that Carol is obviously a much better match for him. You can't imagine how someone could possibly think that Adventures of the Hoola Hoopers can hold a candle to Hoola Hoop Strike Force X. And you're here to tell us that.

That's fine. This is how a wiki works: You share something you think or know about a subject, everyone else reads it, improves it, tampers with it. So far, so good.

But there's this... thing... that tends to happen in that kind of situation, where the endless possibility of editing a high-traffic site gets a contributor all giddy, and they become Drunk on the Dark Side. They slowly acquire the impression that editing a wiki is equivalent to Rewriting Reality; instead of writing about how things are, they start writing about how things should be.

This isn't Wikipedia, so we're not going to split hairs about neutral points of view and citations and whatnot, but we still try to tell it like it is. Our readers should be getting the right idea, or failing that, at least some part of the right idea. Wild theories do not become "possibilities" on TV Tropes. Crack Pairings do not become Fan Preferred Couples. Kinda-bad episodes do not become shark-jumpings. If Our Mileage May Vary regarding something, we're interested in reading about how and why the mileage varies — not in being told which way we should be varying it.

As long as there is only one point of view on the table to begin with, and that point of view is so prevalent that no one has even bothered to try arguing with it, fine — we're not looking to dig out false "balance" from under the ground. Hopefully it's still there because it's reasonable and not because of neglect. But the moment two opposing points of view are trying to be persuasive on the same page, bad things happen. Reconciling them becomes impossible. Either one of them beats the other into submission and the article becomes a propaganda pamphlet, or they keep taking jabs at each other and the article is consumed by Edit Wars and Thread Mode.

Our goal is to have an article that's entertaining, informative and consistent. If everyone's hell-bent on dyeing the text their color, that goal is a lost cause. Do your best not to be a part of that equation. If you find yourself caught in an edit war over varying mileage, by all means wash your hands of it and try to write down something that everyone will agree with. Opposing points of view can and do get along on an article - as long as neither of them is trying to tell the reader what to think.