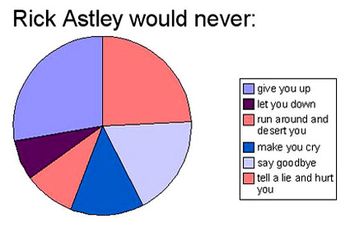 In the right context, any chorus/hook of a song can be a breeding ground for Memetic Mutation. Many examples here and whole Meme articles have been further mutated through Misheard Lyrics. Just do a YouTube search for them, you can't miss 'em. See also Stupid Statement Dance Mix.

Just a warning: this page is a bit outdated. YouTube being YouTube, many of these links are broken, private, or removed.

Kanye West has his own section of memes, and so do Death Grips, BTS, LOONA,SiIvaGunner, and Pink Floyd. Likewise, Caramelldansen has its own page- please put entries for those in the Caramelldansen Vid page.

Memes not tied to a specific song

[drum slam]
AND IIIIIIIIIIII-EE-IIII, WILL ALWAYS, LOOOOVE YOOOOOUUUUUU...Explanation The high-decibel Truck Driver's Gear Change of Whitney Houston's "I Will Always Love You".