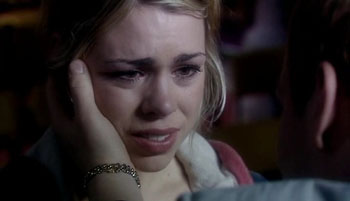 TISSUES! GET YA TISSUES HERE!
Rose: This is my fault.
Pete: No, love. I'm your dad. It's my job for it to be my fault.
Advertisement:

The one that did Rickrolling before it was cool.

In a flashback, Jackie Tyler is talking to her young daughter Rose, telling her of the day her father Pete was struck and killed by a hit-and-run driver while picking up a gift to take to Stuart Hoskins and Sarah Clarke's wedding. A sad tale, dying alone on the street.

In the present day, Rose becomes nostalgic and asks the Doctor if it's possible to witness her father's death and be there for him when he dies. Landing a short distance away, they watch as Pete, getting out of his car carrying a wedding gift, is struck by a yellow car and knocked a good distance to the pavement. The Doctor tells Rose to go now to his side, but she freezes up. The moment has passed, and Pete is dead.

They back up against a wall, where Rose begs the Doctor to let her try again. The Doctor agrees, but sternly cautions her that they must be extra careful due to the presence of their selves from a few minutes back being there. From a different vantage point, they watch as Pete drops his gift, bends down to grab it...

... and then Rose runs into the street and pulls Pete safely out of the path of the car.

The earlier versions of the Doctor and Rose vanish. Pete, after recovering, thanks Rose and offers them a lift to the wedding, for which he was just about to get changed. The Doctor looks very sternly at Rose for about ten minutes while Pete invites them over to his flat first and, once there, is quick to try to explain the severity of the matter to Rose, who truly didn't know about the consequences. Rose continues to think that Pete's just this guy, and the universe isn't going to fall apart because she saved him. The Doctor again chastises Rose, but she's having none of it. The Doctor storms out on his own. Once Pete's ready, he and Rose set off to the wedding in his car.

The Doctor arrives at the TARDIS, but on opening the doors, finds it nothing more than an empty shell. He races for the church knowing that Rose (and everyone else) are in danger.

Unseen by our heroes, large globs of CG have started appearing in the sky, swooping down to consume unsuspecting humans.

Along the way to the wedding, Pete's radio starts to blare out anachronistic rap music, while Rose's voicemail messages just repeat "Watson, come here, I need you". They shrug it off by the time they get to the church, where the wedding party is congregating. They are surprised by the appearance of a yellow car, seemingly out of control, which nearly hits Pete before disappearing around the corner. Pete introduces Rose to the guests, including his wife Jackie carrying baby Rose with them.

As they mill about, a young Mickey races to the group, who has seen the other kids at the playground all disappear before his eyes. The crowd laughs it off until one of the beasts actually appears and snatches one of the wedding guests. The Doctor arrives and directs everyone inside the church. As the wedding party recovers, the Doctor explains the creatures are Reapers, which act like white blood cells, cleansing the wound in time created by Rose by destroying the living creatures within it. The great age of the church will give them time and protection, but eventually the Reapers will break through.

In private, the Doctor explains to Rose that normally, the Time Lords would have prevented paradoxes like this from happening. Rose apologizes, and the Doctor reiterates that just one man can be vitally important to the universe. He also warns her about touching her infant self, as that could cause further temporal damage. He suddenly pulls out the TARDIS key, hot and glowing. Racing to the centre of the church, the Doctor tells everyone to stay away as he uses the key to start materialization of the TARDIS within the church, a process that will take time and should not be disturbed.

The uneasy guests mill about. Rose finds that Pete and Jackie, though married, are in an uneasy relationship; nothing like what Jackie had told her. Rose talks to Pete more, and he starts to come to the conclusion that Rose is his daughter. When Jackie overhears Pete referring to Rose as his daughter, she is disgusted. Pete tries to point out that the woman is Rose, all grown up. Jackie refuses to believe it, so Pete does what's most natural to him: he thrusts baby Rose into Rose's arms to show Jackie how they compare.

That is exactly what the Doctor warned Rose about, and suddenly a Reaper appears inside the church due to the weakened fabric of space-time. The guests scatter as the Doctor races down the centre aisle; as the oldest being there, the beast will be attracted to him. The Reaper swoops down, grabs the Doctor in its mouth, and then hits the glowing TARDIS outline. A flash of light — and when everyone looks around, the Reaper, the Doctor, and the faint image of the TARDIS are gone; the TARDIS key sits on the floor, cold and dead.

Rose and the other guests start to give up hope as they see and hear more Reapers converging on the church. Pete, while looking outside, sees the yellow car pass by again. He starts to put two and two together, and realises he was meant to die earlier that day. Rose tries to tell him he's wrong, but Pete will have none of it. He has a tearful parting moment with Jackie, their child, and adult Rose. As soon as the car appears again, Pete rushes from the church, the Reapers on his tail, and jumps in front of the car.

The wedding crowd, outside the church, witnesses the accident, and starts to congregate around it. Rose, looking around, sees that those guests that were eaten by the Reapers are back, and no-one but her seems to be aware of the incident. As she watches, a hand falls on her shoulder — the Doctor, also back, tells her to go to her father now. Joining Pete by his side as he dies, Pete remembers the time fault, and smiles at Rose. She stays with him until he dies. As emergency vehicles converge on the scene, the Doctor and Rose slip away, walking back to the TARDIS hand-in-hand.

A flashback, again, but different this time: Jackie tells young Rose of the day her father died, and an unknown woman that stayed by his side after the accident. Rose recounts in a voice-over her appreciation for Pete, "the most wonderful man in the world".

One of the more emotional episodes of Doctor Who, if you couldn't tell.